It’s always fun to meet and get to know someone new. Even more so when a new sector emerges on the horizon of innovation; it’s an indication of new solutions, more variety, new experiences, and a broader scope in general. Recently, the Industry 4.0 sector has emerged into the innovation spotlight, showing that it is indeed a force to be reckoned with, and that Industry 4.0 start-ups are thriving and contributing to the Israeli innovation ecosystem.

The First of Many… 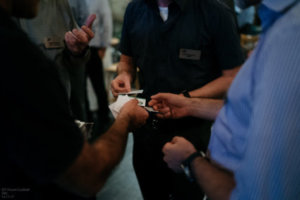 In November, Start-Up Nation Central, together with partners PricewaterhouseCoopers and Grove Ventures, presented the first Israel Industrial Internet of Things (IIIoT) Conference at the port of Tel Aviv. Sponsored by a range of global industrial corporations that included GE Digital, DIVEdigital GmbH, Advantech, GiTV, Flex, and the Israeli Ministry of Economy, the conference comprised more than 400 participants of whom a significant percentage came from various locations around the world.  The purpose of the IIIoT conference was to create a sense of community among the participants, and to engage interactions between industrial corporates in search of solutions, and the industrial start-ups who are developing them.

Exposure to the Issues

The conference was extremely well-attended, particularly for a first-time event, and provided significant exposure for Israeli start-ups to the specific challenges faced by industrial corporates from many and varied vertical markets. Rather than subjecting conference participants to empty speeches and “Death by PowerPoint”, representatives from the global industrial corporates Samson, Utiligent and Faurecia  spoke about the very real issues that they face, and how Israeli innovation can help them. Furthermore, during the conference, more than 40 one-on-one meetings were conducted between various global participants and Israeli start-ups and innovation powerhouses, indicating that there is much untapped cooperation just waiting to be accomplished, and many great partnerships to be forged.

One of the highlights of the IIIoT conference was the culmination of a competition that had manifested itself over the previous few months. The first ever start-up competition to recognize outstanding achievements in industrial technologies was sponsored by GE, who provided a grand prize of unique opportunities to the winner. The competition had 30 applicants and yielded three finalists: Kitov Systems, innovators of a computer-vision-based automated quality control system, ScadaFence, developers of cyber security solutions specifically for industry, and the eventual winners, Fieldbit, creators of an augmented reality (AR) based collaboration platform for field services.  Congratulations and well done to the winners!

Shani Keynan leads the Industry 4.0 Strategic Projects at Start-Up Nation Central, a non-profit organization that engages business leaders worldwide with key players in Israel’s innovation ecosystem. Shani graduated with a BA in Economy, Philosophy and Political Science from The Hebrew University in Jerusalem, and was the founder and CEO of Vidarmo, a Bitcoin Algotrading company from 2013-2016. Shani’s current focus is on how Israeli entrepreneurs use the technological advantages gained across various sectors, and leverage them to solve global challenges in industrial sectors like manufacturing, construction, energy and infrastructure.