The likelihood that sometime between now and the end of March you’ll find yourself in a doctor’s office is fairly high. Nothing to worry about, though. Everything is in the computer, the doctor knows your details, and what they don’t know, the computer lets them know. Simple!

Or is it? While it’s fair to say that this is no longer the age of the travelling quack and their cure-all-yet-cure-nothing range of ineffective remedies, it may surprise you to know that you are blindly relying on a computer system with a fairly meagre failsafe mechanism. Unbelievably, human error can still have shudderingly fatal consequences.

Some years ago, a nine year old boy died because his doctor made a human but fatal error with his prescription. Instead of prescribing a drug for asthma, the doctor accidentally clicked the drug below the one he intended to click in the computerized system. A simple misguided slip of the hand, and instead of asthma medication, the prescription provided was for a blood-thinning drug. 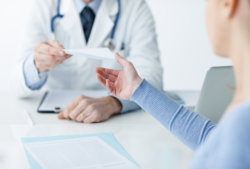 No one noticed the error. Not the doctor, who should have double-checked the prescription prior to rubber-stamping it. Not the pharmacist who should have noticed that there was an anomaly in the prescription (face it, precious few nine-year-olds require anti-coagulants). Not the insurance company, who authorized the drug and somehow didn’t notice that it was completely inappropriate. Not even the boy’s parents, although they were the least likely to know from the name of a drug that something was wrong. Despite the mistake being completely understandable, if horrifically dire, and made by an individual, it was not a case of bad judgment, rather one of human error – and it represents the failure of a system. At any of the stages listed above, the mistake could have been spotted, and the ensuing tragedy avoided – but tragically, it wasn’t.

Worse Than it Seems

This situation is much worse than it might seem. Patients are being put in peril, exposed to harm on a daily basis. Moreover, the preventable wasted costs of healthcare are huge. For every four billion prescriptions in the US, eight million will contain errors – and this is an extremely conservative estimate.

When the incident was discussed in professional circles, it was presented as a force majeure about which nothing could be done. Co-founder of MedAware  Gidi Stein believed that something could indeed be done about it, and more to the point, given that he would never want to be the physician, the parent or even to know someone to whom this happened, he decided to find a way to fix it. It was what some people might call a moment of extreme clarity, and in that moment, MedAware was born.

MedAware uses disruptive AI technology to enhance patient safety. It is based around a data tracking and analysis application, similar to those used to identify patterns of usage and behaviour of credit card users, but applied to medical data. The solution recognizes anomalies and aberrations in the system, using patients individual medical records to flag any errors, as well as “crowdsourcing” physician practices, and deriving insights to help promote patient safety in other ways.

It would be presumptive to say that no failsafe procedures and solutions currently exist. They do, however EMR-embedded rule-based systems, such as dosage checkers, drug interaction databases and allergy checkers, only catch a small fraction of the errors, and are not structured to indicate such a random event as selecting an incorrect option from a drop-down list. These solutions flag an average of at least 10% of prescriptions, with a 90% False Alarm Rate (FAR), largely because they are rule-based and non-personalized. This extremely high FAR results in alert fatigue (meaning that alerts are so often false that this has become the prevalent presumption; consequently the alerts are rarely paid much attention).

On the other hand MedAware is extremely personalized, since its data is based on the actual patient records. Likewise, MedAware uses machine learning to keep ahead of the curve, and be as aware of irregularities as possible. Unlike current solutions, MedAware’s solution includes a clinical surveillance component, which continuously monitors any changes in a patient’s status, actively scrutinizing for potential clashes between various adverse drugs and medicines. MedAware also flags fewer than 0.5% of all prescriptions, and its FAR is below 20%. Furthermore, when physicians receive an alert from MedAware, in the vast majority of cases they check the prescription and make a change based on the alert.

Is There Any Greater Value?

Of how many products can it be said that their value proposition includes saving human lives? That’s the case with MedAware. When it comes down to it, before profit margins or anything else, the main catalyst for the product is preventing unnecessary human tragedy. Of course there are several other additional value propositions, including being able to significantly contribute to the reduction of preventable wasteful healthcare costs by honing the effectiveness of the EMR system, as well as reducing potential malpractice litigation.

To quote  Gidi Stein: “Rather than inventing something new, or making a judgment call, we are mirroring the situation back to physicians, and increasing the level of safety and security for patients.” You can’t ask for more than that.