The roots of Israel’s Agritech sector are older than the state itself: twelve of Israel’s largest Agritech companies were created before the country even officially came into being in 1948. Recently, however, the sector has enjoyed a surge of new, technologically innovative companies, spearheaded by highly skilled founders, many of whom have backgrounds in other domains within the country’s high-tech ecosystem. These entrepreneurs and their teams constitute an innovation labor force which is 18,000-strong — a significant pool of high-value human capital, with big ideas, and big markets to play for.

This sector is also yielding diverse innovation in most major segments of the Agriculture value chain, including an emergence of Smart Farming and Alternative Protein as strong growth areas.  In particular, Smart Farming stands out, with a growth of 29 companies (94%) over the last five years—almost three times as fast as any other sub-sector and constituting over a quarter of all Agritech companies founded during this period. Notable also is the growth of the other Agritech subsectors, including Farm-to-Consumer, Special Crops, Machinery & Robotics, Food Safety, and Traceability.

Of the 460 active Agritech companies tracked in Start-Up Nation Finder, more than 25% were founded in the last five years, and 50% over the last ten. This indicates a sector which, despite its established historical roots in Israel’s collectivist farming and living kibbutz movement, is characterized by a flurry of new companies and innovations.  At least 60% of the companies founded in the last five years — the really young companies — have received external financial backing, largely seed funding.

The sector is also attracting more investors, both from within Israel and from across the globe. In the first half of 2017, Israeli Agritech companies offering on-farm solutions raised $80M – 7% of the global funding for such technologies; and those innovating specifically in Smart Farming raised $12.5M – 6% of global investments, with a further $26.5M raised since then. Even with one quarter of 2017 remaining, funding has already exceeded the levels raised during 2016 by 35%. 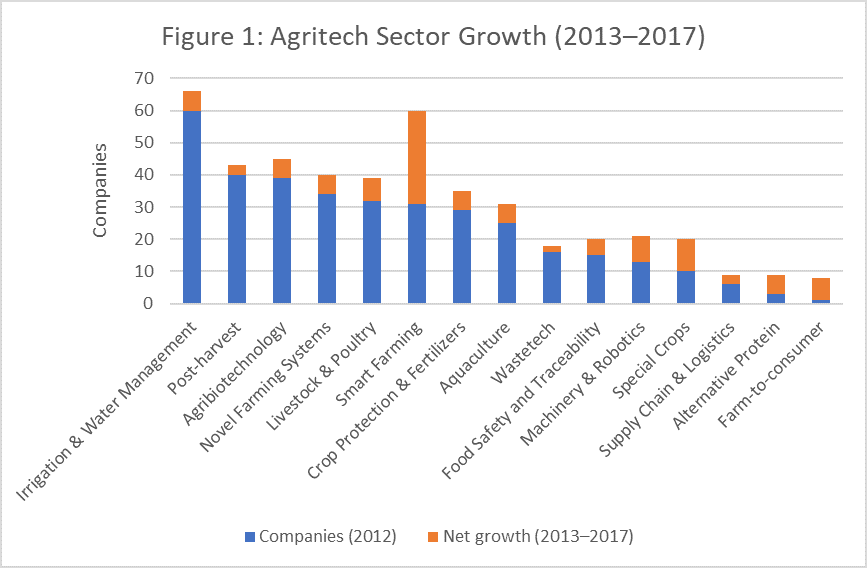 This level of funding is extraordinary, especially for a tiny country the size of New Jersey, and where Agritech entrepreneurs must, by design, seek global testing and proofs of concept on large farmlands abroad.

Leveraging innovation and talent in the high-tech sector, along with decades of experience in overcoming agriculture challenges, the Israeli Agritech sector is becoming a force to be reckoned with. Quickly developing new solutions to some of the world’s greatest agricultural issues, and with a highly skilled but relatively cheap labor force, the Israeli Agritech sector is an opportunity for investors and farmers alike.