In Nimrod Israely’s previous career as a fruit farmer, spraying pesticides was part of his daily life, but it was always a big problem for him. Not only were the poisonous pesticide chemicals not entirely effective, but the indiscriminate way that pesticides were sprayed meant that while certain pests were indeed destroyed, so were many non-harmful insects who are the natural enemies of the pests.

This prompted him to discover a nonpoisonous and more effective alternative to spraying, which targeted only specific pests. In pursuit of this aim, Nimrod established Biofeed – a company focused on preserving the environment while developing solutions for pest control without having to resort to spraying. After seven years researching various methods within his orchards on Kibbutz Tzuba, he expanded his operations across Israel to develop the technology, using the entire country as his beta testing site. The baseline that Nimrod used was the Mediterranean fruit fly – a perfect example of a hugely problematic pest globally, and for which no satisfactory alternative to spraying existed.

Not Sight, Taste, Touch or Hearing…

The answer was surprisingly simple: smell. The smell can either attract or repel, depending on the combination of various molecules. More to the point, a pest will respond to an attractive odor even from hundreds of meters away – as demonstrated by how insects find a mate, or how mosquitoes find humans to feast on at night. Since less fragrance is required to attract than to repel, Biofeed developed a smell combination that lures and attracts pests to a specific location, and once there, eliminates it – a methodology known as Attract and Kill.

The Coca Cola™ of Pest Control

Biofeed have developed an amazingly innovative solution, using a secret formula which incorporates a smell to attract the insect, and an active ingredient to kill it. Much like the secret ingredients of Coca Cola™, the secret of the formula is kept closely guarded, and consists of three elements: 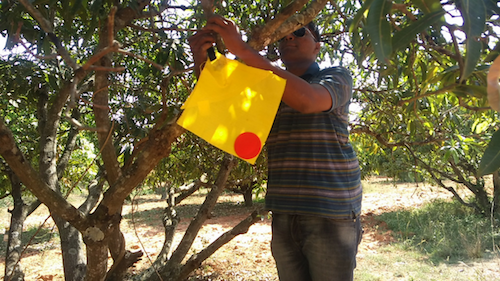 Biofeed’s unique mechanism uses no electronic widgets or complicated devices – simply a small bottle of formula in a panel of waxed hessian. Utilizing Gravity Control Formula Release (GCFR), the bottle of formula is inserted into the panel and once pierced, dispenses a few drops of formula per day into the diamond-shaped panel. The tiny pierced hole regulates the constant, unchanging pressure of the formula’s release. The formula does not evaporate, so there is no change in the smell, which is the crucial success factor in utilizing this methodology, as it enables the effect to remain constant. The panel is also effective regardless of external conditions – even in the rainy season, the same amount of formula is dispensed daily, and the panel has an approximate life span of four years.

So… How Does it Work Again?

The insect is attracted to the smell, lands on the panel, feeds off the delicious-yet-fatal formula, and then flies away.

Take heed, though – the mechanism is not a trap. There are other traps on the market which use smell as their honeypot, but their various methodologies are largely ineffective due to non-controlled methods of release, leading to inconsistent level and strength of smell. Such mechanisms also have much bigger overhead of maintenance and service. The advantage of Biofeed is its ability keep the complex smell unfailingly constant.

Biofeed is unique in pest control in that it parallels the methodology of nature. Just as insects release pheromones, so Biofeed releases smells in much the same way. This is already helping solve the pest problem across the globe, with its ability to control some of the world’s most prevalent fruit fly pests, including Bactrocera zonata and the notorious Bactrocera dorsalis, well-known as the number one fruit fly pest in the world, and acknowledged as an agricultural global crisis, as determined by CABI. 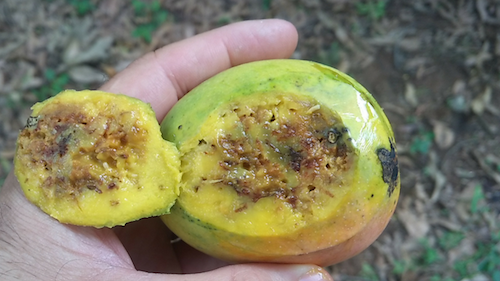 There is no other known solution to this insidious pest. Both traps and spraying methods have garnered little, if any, effect. Even the methodology of Mating Disruption, which attempts to eulogize the species by eliminating the possibility of reproduction, has not been very effective in reducing the need to spray pesticides (an average reduction of only 50%) and on top of all that it is extremely expensive.

What’s worse is that a fruit fly infestation can affect anywhere from 30-100% of the crop, literally destroying the livelihood of farmers across Asia and Africa.

Biofeed has demonstrated that its capabilities are real and effective. In India, for example, the most important crop is mango, which is under constant attack by the Oriental fruit fly and other pests. In its trial project in India, Biofeed took only 18 months to create a new solution to eradicate this threat – which is highly impressive, given that most companies take anywhere from 10-20 years and $200-300B to develop a new product. This new solution used ten units (panels) per hectare and was highly effective enabling the farmer to reduce infestation by a staggering 95%. To number-crunch that into perspective, compared to the quantity of fruit that the farmer could reap previously, there is now an increase in reapable produce of between 50-500%. And all this using the same monthly resources and labor.

Biofeed’s aims are not just the eradication of a pest, but rather to provide positive benefits to the health of the human population. Looking to the future, Nimrod hopes to see a world where poison is no longer part of the supply chain — if the primary pests are eliminated, far fewer chemicals will be required to treat the secondary pests, because their natural enemies will do the job instead. Additional hopes include the potential eradication of pests that directly affect humans, including mosquitos. As Nimrod himself says, “We won’t be satisfied with anything that is less than the best.”